Here's from a discussion with Trent Horn on abortion at Emory's Medical School.

A talk through here:
Powerpoint is also here. Presentation as text here.
Thanks to some of the comments online, I realized that a few things at the event prevented me from responding to Trent in an ideal way there. So I made some videos and a text that better engage Trent's initial talk. I hope people find them helpful for better understanding the issues! Thanks!
A Revisited Response to Trent Horn from Nathan Nobis
Response playlist.
Trent's "Opening Statement" which the videos and text below are a response to.
Here are the notes with the arguments and responses stated that I use below.
Full set of videos:
An Introduction Video:
The “Humanity” Argument Against Abortion:

A Revisited Response to Trent Horn from Nathan Nobis

Notes below; talked through here:

Too bad none (?) of the medical students, students or any pro-choice people showed up to hear Trent.

At least I need an outline or handout or visuals to effectively follow, at least in these situations.

Listening, taking notes, and formulating a response all at once is something I cannot do. I’m a “slow listener.” Now I know.

There are some very close details here; very hard for anyone to engage this material without notes and visuals. Really cannot be done?

So, here’s my review of Trent’s arguments.

Trent’s conclusion: “Abortion is gravely immoral and ought to be illegal.”

All these premises are false.

2. The fetus is an innocent biological human being.

2: Why accept 2? Science supports this, he claims.

My response: science supports that these are human organisms; whether they are human beings depends on what’s meant by “human beings.”

“Human being” definition 1 = a “being” that’s biologically human.

What’s a “being”? Not just anything that “has being”: organisms?

“Innocent”: I think the term “innocent” really only applies to beings who could do something wrong. So embryos and beginning fetuses are neither innocent nor not innocent: term just doesn’t apply.

Trent responds to a question based on a misunderstanding: Whatabout friendly space aliens? Suggested answer: these aliens, we are, are of a rational “kind.”

If 1 is true, then taking people off life support is wrong?

Trent’s response: we are letting them die, not killing them.

My response: what if they were actively killed? Why would that be (seriously) wrong?

What if there was some urgent need to speed up the process? Would that be wrong? (Not really? Or there could easily be a good reason to justify doing this).

Later Trent argues these human organisms are persons. So he thinks some persons are OK to let die. It seems to me like it’s OK to let a body die because there is no a longer a person there: if there were a person, then it’d be wrong to let them die.

Lots of discussion of this type of argument in this article: 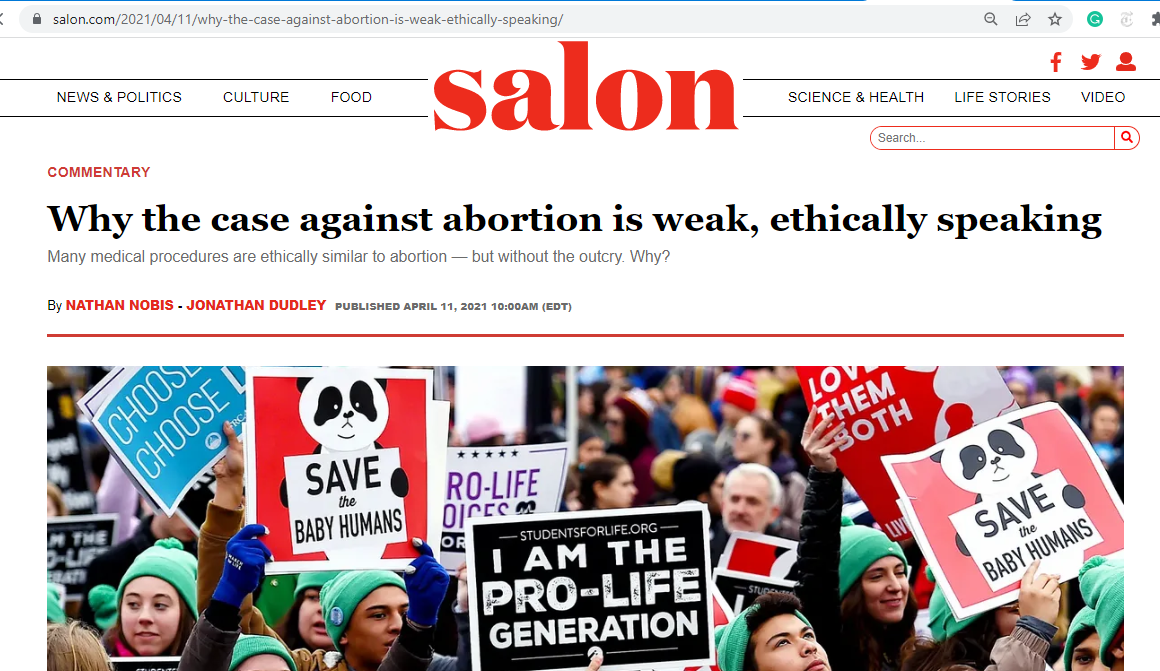 What distinguishes persons from non-persons? Lots of questions here to think about.

Trent claims that rats and pigeons are not persons. He claims this is a “clear case.”

Really, rats and birds are like rocks and plants? Some of the top philosophers and law professors and others argue that (some) animals are persons or are personlike.

Comment: suppose someone says, “Embryos certainly aren’t persons. They certainly don’t have the right to life.”

So what are “persons”

= an individual member of a rational kind, with the “innate capacity for certain functional abilities” . .. “rational capacity.”

Other options, that build on the “sentient being” example:

Some concerns about persons are “individual members of a rational kind, with the ‘innate capacity for certain functional abilities’ . .. ‘rational capacity.’

Comments about 4 - yes, but perhaps not “intentionally”: that’s not the intended goal, which is to end a pregnancy or prevent parenthood.

Comments about 5 - there are exceptions, of course; there can be cases where it’s OK to kill an (innocent) person when they are using something that they don’t have a right to, or you are not otherwise obligated to provide them with. “Bodily rights” discussions. 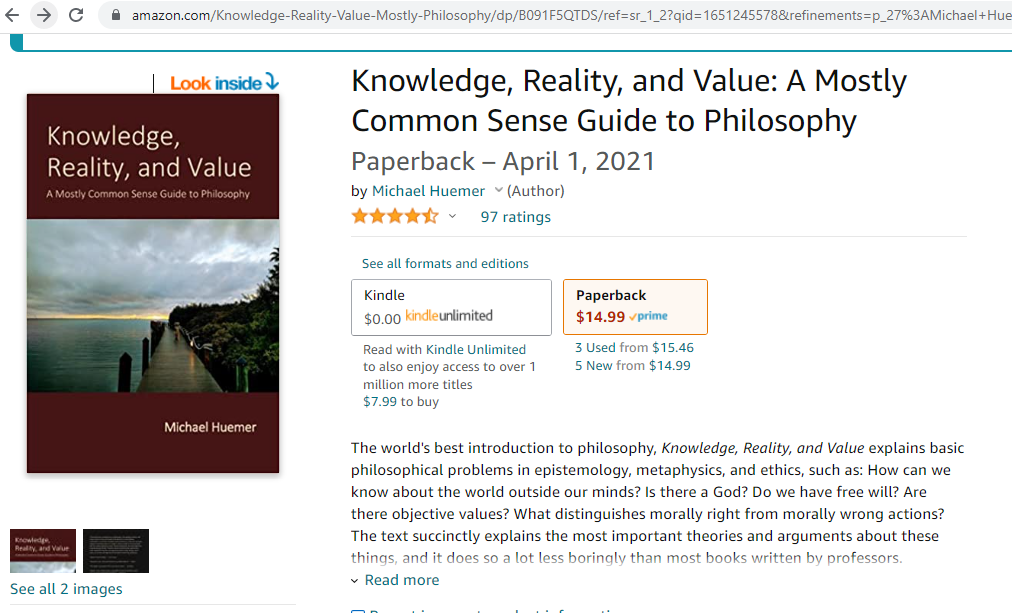 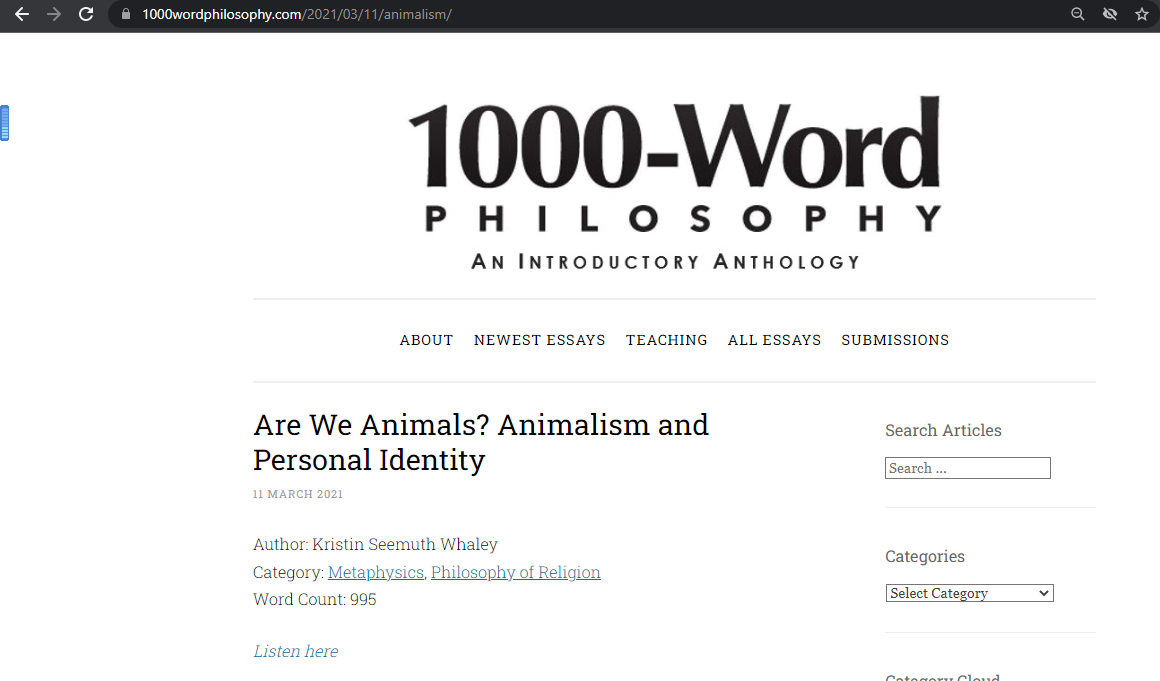 6. If an organism that ever existed has never died, then this organism still exists.

7. I am [essentially, in essence] an organism.

8. Therefore, I am an organism that once existed in my mother’s womb and never died.

9. It is always prima facie wrong to kill me.

10. Since I existed in my mother’s womb, it was prima facie wrong to kill me then.

11. That’s true about everyone: what’s true of me is true of everyone.

A lot of people would ultimately deny 7 that “they are [essentially, in essence, an organism]”: if they went into a permanent coma or become brain dead, the organism is there but they – the person – are gone.

Also, many people think they could “survive” death – they could go to Heaven (or Hell) even if their body is destroyed: so they are not their organism, in essence. (Such folks don’t have to believe they could make it to heaven only if their body, with enough of the same matter, is “rebuilt”.)

Related: about 9 (9. It is always prima facie wrong to kill me) in such cases the body can be OK to let die: so “you” can be let die. If you = your organism and that organism is a person, then it’s OK to let people die. (Also, there could be cases where it’d be OK to actively kill that organism; see other discussions).

This argument also assumes that properties that give “someone” the right to life are essential to that organism: many animalists deny that (ask them!): so they deny 9.

Maybe I am not an organism: maybe I am a mind. (Other options: maybe we are both? Maybe we are neither, e.g., we are souls?).

Trent: If we are minds and not organisms, then nobody has been raped: that affected their body, not them.

Hmm: that is just basic factual data that everyone agrees on whatever you think about any highly abstract metaphysical issues. (Someone should write an article arguing that only “animalists” can acknowledge the existence and wrongness of rape; submit it to an analytical metaphysics journal or send it to leading animalists (e.g., Eric Olson): see what happens or what their reaction is)

Trent: If I am not my body, then the government could take my body, tax my body.

Hmm. Again, we are very closely related to our bodies: even if I am, in my essence, my mind, if you take my body, you take me, or part of me.

Also, the government does “take” people and their bodies: the draft, imprisonment, etc. These facts have nothing to do with any highly abstract metaphysical theories.

Trent: if I am a collection of thoughts, then I don’t think.

Hmm. This is deep. The view is, roughly, that the “thinking thing” would be this collection of thoughts.

If you think you are a body, since you can lose parts of your body, yet you still exist, what body part(s) are essential to you? (Or are you the whole thing, spacio-temporally connected, even though some body parts aren’t essential?)

You are a thinking animal. (One response: does this view allow for an afterlife, for those who believe there is one?)

If I am thoughts, what happens when I sleep?

If you wake up, you’ll be back! There were also prior mental experiences that had expectations, plans, etc. for the future. And again, people who think that we are minds don’t deny that we are closely related to our bodies.

Trent mentions that some rights he has always had, such as to not be tortured or enslaved. But if he was an embryo, since you can’t torture or enslave an embryo (right?), he didn’t have those rights then. So some, even important rights are not essential to the organism: other capacities are necessary to have them.

General thoughts: the metaphysics of personal identity is really controversial. Really understanding the options takes a lot of hard study. Suggestion: run these arguments by advocates of animalism and see what they think!

From philosopher Don Marquis, who interestingly argues that arguments like Trent’s “humanity” and (I think) “personal identity” arguments fail:

12. Killing us is prima facie wrong.

13. Killing us is prima facie wrong because it deprives us of our valuable futures (a “future like our’s”).

15. Anything with a valuable future like our’s is prima facie wrong to kill.

One objection to this argument:

Response: really? Babies have minds; they are aware of things; they know who different people are. People talk about playing music to the fetus in utero and getting reactions, and then the baby has a reaction when born: that’s memory. A baby is not like a mythical 10-second memory goldfish. Babies are quite different from embryos: babies have minds: they are conscious and feeling; they exist over time, which is how they are able to learn things, etc.

Marquis’s arguments are most popular – meaning often thought to be the best – among philosophers. Not popular among most real-life abortion critics.

Why’s that? Perhaps because his views can support euthanasia; could support some abortions (in cases of an extremely bleak future), and can be adapted for positive results for animals too.

Again, Trent advocates for asphyxiating / gassing rats and reports that few people would find that problematic. How would the rats feel about that? What would there experience be? Golden-rule: how would you like that if that were done to you?

There is lots of interesting discussion about Marquis’s arguments. Check it out!

Note: this argument is supposed to not depend on fetuses being persons.

Trent says this presumes that the beginning fetus was an individual who was harmed.

No, it doesn’t: it entails the “raw materials” or “building blocks” were damaged, not that there was some individual (or person) who was harmed.

Again, advocates of the Impairment Argument think their argument does not assume that beginning fetuses are persons. An abortion prevents these “raw materials” or “building blocks” from becoming a person with a quality of life that is worse because of that drinking: so the explanation why pregnant women should avoid drinking heavily does not entail abortion is wrong.

There is an interesting philosophical literature on this argument: check out PhilPapers or Google Scholar about it.

My goal is that people better understand these issues and seek better arguments. I hope this helps.

3. An Argument from Personal Identity

12. Killing us is prima facie wrong.

13. Killing us is prima facie wrong because it deprives us of our valuable futures (a “future like our’s”).

15. Anything with a valuable future like our’s is prima facie wrong to kill.