There is this often made claim that "consent to sex is consent to pregnancy." This is intended to be an argument, in this case, a reason to believe that abortion is wrong.

Unfortunately, it's a poor argument. 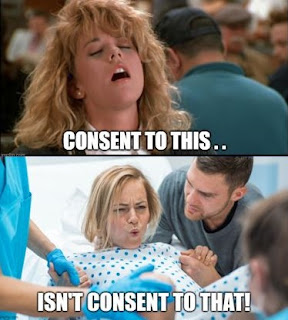 Why's that? Well, you simply need to think about what the argument is. It's something like this:

The problem is that assumption 2 is false:

Gobs of obvious examples show that a premise like 2 is false: since the argument depends on a premise like this, it's bad.
+
Now, sometimes we do things that have results that are simply unavoidable: nothing can be done about those. That leads people to observe things like, "If you consent to – or knowingly agree to – jumping out a plane without a parachute, you consent to – or knowingly agree to – smashing into the ground!" Yes, indeed!
Pregnancy is not one of those actions though: something can be done about it, to undo it or restore the woman back to her pre-pregnancy state: that's what abortions do. (Obviously, nothing "restores" anything to the exact same state: the past is never undone, about any of the example above).
+
Also, we sometimes consent to doing things that have possible consequences that would be morally wrong to "back out of," so to speak.
But that can't merely be assumed in this case, or any other. And, if you've got great reasons to think it'd be wrong to stop a pregnancy, you don't have to appeal to anything about consent: you'd think that's wrong if there's consent and, typically, even if there is not.
+
And pregnancy, of course, is not an inevitable, unavoidable consequence of sex; it cannot simply even be said to be a very likely consequence of sex.
What are the chances some intercourse will lead to pregnancy? That really depends on a lot of factors (see here also), so much so that there's really no general answer to be given here: sometimes the chances are high, sometimes they are low.
+
Now, people sometimes respond to all this by insisting that abortion is wrong and evil, and that any sex that leads to pregnancy leads to a fetus that would be wrong to abort.
That may be, but this argument above is supposed to show this, not merely assume it or "beg the question" which means "assume what you need to argue for or given reasons to support."
And, again, if there were great reasons to believe that all abortions are wrong, there would be no need for this "consent" argument anyway: if abortions were just wrong (or, say, fetuses were persons with the right to life which includes a right to the woman's body), then whether anyone consented to anything or did not consent would be just irrelevant. However, again, this argument gives no good reason to believe that abortions are wrong.
+
So, what's going on here? Why do people appeal to this bad argument?
Well, the most natural explanation is confirmation bias: people want to latch on to anything that seems to them to support their own point of view, even if it doesn't: people mistakenly think, "I accept this view, and so any argument in its favor must be a good one that I must accept!" This, of course, is a mistake and, again, this is a case where the argument does not support the intended conclusion. Other arguments might, but this one does not.
*** Note: some claim that since whether a pregnancy occurs is a random event that's beyond anyone's direct control, nobody can consent to pregnancy: you can only consent to actions being done by other people, and becoming pregnant isn't that. That's fine, but an advocate of a "consent argument" like above doesn't have to disagree: they claim that she consented to do something that might result in pregnancy, and so she must remain pregnant: if you want these folks to state their claim without using the not literally true phrase "consent to pregnancy" they could, but that won't make any important difference so what they are trying to argue.
Here are some videos that make these points also:

@nathan.nobis Again, consent to sex isn't consent to pregnancy. Compiling some of the good examples given on previous videos. I will make a blog post about this, since this bad argument is too common. #abortion #prochoice #prolife #criticalthinking #ethics #logic #bioethics #philosophy #consent ♬ original sound - Philosophy 101 - Prof. Nobis

@nathan.nobis Replying to @biljmi87 the "consent to sex is consent to pregnancy" argument & begging the question or assuming what you need to argue for: a follow-up to the previous video. #abortion #prochoice #prolife #bioethics ♬ original sound - Philosophy 101 - Prof. Nobis

@nathan.nobis Consent to sex isn't consent to pregnancy: here's why this is a bad argument. Not all actions' possible or potential consequences must be accepted and not "undone." #abortion #prochoice #prolife #consent #ethics #consenttosexisnotconsenttopregnancy ♬ original sound - Philosophy 101 - Prof. Nobis

@nathan.nobis Replying to @nathan.nobis consent to sex isn't consent to pregnancy: here's why this is a bad argument, part 2: you can't just assume that someone *must* accept a pregnancy: that's an example of "begging the question." #abortion #prochoice #prolife #consent #ethics #criticalthinking #philosophy ♬ original sound - Philosophy 101 - Prof. Nobis

There's also a version of this "argument" that's based on the fact that if you gamble in a casino, you can't "back out" if you lose the game. Sure, fine, but nothing follows here about situations where you can "back out" of what happened: