Is "About abortion, all that matters is bodily autonomy!" true or useful? No.

"Nobody has a right to anyone else's body."

This is a common claim given in defense of abortion.

It's worthwhile to think (again!) about whether an argument in defense of abortion based on this claim is likely sound or not, as well as whether the argument is likely useful for supporting or defending pro-choice views. 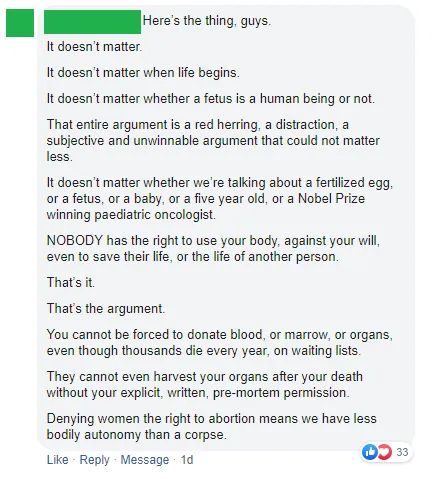 To do this we must think about what the claim might mean. There are different types of rights so there are at least two options here:

To begin with the "moral" understanding of rights, the problem is that even if nobody has a moral right to anyone else's body (and maybe that's not true), nothing interesting must follow from it.

This is because not all moral obligations are due to moral rights. It can be that you are morally obligated to do something – there can be serious moral obligations – yet there are no rights involved: morally, you must do something, yet the other person (or being) has no right to that being done. Some moral theories don't appeal to rights at all, and even deny the existence of rights, yet they recognize that there are obligations.

So even if it were true that nobody has a moral right to anyone's body, that doesn't show that there aren't moral obligations that would make abortion wrong: pregnant women could be morally obligated, even to the fetus, to keep the pregnancy even if the fetus has no rights.

So the appeal to the lack of moral rights here doesn't entail that abortion is morally (or legally) OK.

To better understand this, consider an imaginary case of a drowning child who you could easily save. Most would say you are morally obligated to save the child: it'd be wrong for you to not save the child.

But some will also claim that the child has a moral right to be saved. If they are correct, since saving this child will involve the use of your body, then the child has some right to your body.

Now, these are all quite different from real pregnancy and childbirth, of course. But they are enough to suggest that the claim that nobody (ever) has a moral right to anyone else's body (in any way) might not be true, if we ever have rights to assistance and benefit from others.

To the response that, "But pregnancy is so much more demanding than any of these silly examples here!" that's true, and that changes the argument by focussing on the demandingness of the right, not the existence of any right whatsoever. And suppose there was a pregnancy and childbirth that would be, somehow, super-easy, even pleasurable. Would the advocate of this argument think that in this situation the fetus has a moral right to the woman's body? Probably not.

In sum, even if nobody (ever) has a moral right to anyone else's body (in any way), abortion could still be morally wrong. And, of course, it could still be such that it should be illegal.

Let's consider the legal understanding of rights in the claim above:

nobody has a legal right to anyone else's body.

What this means is that nobody will be legally or criminally punished for not letting anyone else use their body. The famous McFall versus Shrimp case demonstrates this: in brief, someone's relative was not forced or compelled by the court to donate body parts, so to speak, to the other relative, even though that relative needed those body parts to keep living. This suggests that the legal right to life are not the right to everything you need to stay alive, even if what you need to live is someone else's body.

So, about abortion, the claim is that a fetus doesn't have a legal right to the pregnant woman's body and so she would not be compelled or forced by the court or police or criminal justice system to provide assistance to the fetus.

That sounds good to some, but the problem  – for purposes of people understanding pro-choice positions and increasing the chances that they will support them – is that this can sound bad to many people, for plausible reasons. Why's that? Because:

To clearly see the last claim, consider the real-life tragedy of these people knowingly watching a man drown (and laughing at him!), when they could have saved him or at least tried.
I think these people did something wrong, very wrong. But it turns out that the drowning man had no legal right to be saved: these people broke no laws in not saving him or making an attempt. (You might not know that "Good Samaritan" laws protect people from liability if they try to help someone: they don't require that people help.)
I did a highly informal, unscientific survey, however, that suggests that maybe around 80% of people think that these people should have been legally compelled to help the drowning man: not helping him should be illegal and some kind of punishable crime.

This is old news, but do you think these people who watched a man drown (and didn't help him) should have been subject to some legal or criminal penalties? #survey #ethics #law https://t.co/EkHWjuMyYr

So just because an action isn't legally required doesn't mean it shouldn't be. If we should be legally required to help others (sometimes), then our laws not requiring that we do are an injustice. Maybe that is correct.
***
How does this all relate to abortion?
Basically, when some people hear appeals to the right to bodily autonomy to defend abortion, they hear this:

So by appealing solely to bodily autonomy, or the right to one's body, the pro-choicer can look like a real jerk, like someone who is defending the current legal right to allow people to drown, even when they could be saved: "You can't prevent my not doing that!! You can't force me to use my body to help someone!!"
Giving this impression is bad: it gives the impression that these pro-choice people are defending a (current) legal right to do what's morally wrong, even evil. This, of course, is why some argue that the laws should change.

So, if you observe what people say in defense of abortion, especially online, you'll quickly find people who say things like this:

When it's explained why embryos and beginning fetuses are plausibly not persons, and aren't "human beings" in a more ordinary meaning of that term (something like "human organism with awareness, feelings, thoughts, emotions, etc".; or a biologically human person), some pro-choice person responds like the above, saying it's so naive and pointless to discuss such matters since to justify abortion, they claim, all that matters is a woman's right to bodily autonomy: that's all anyone needs to recognize.

This is all obvious, but it can be applied to abortion only by thinking about the ethical status of embryos and fetuses, at various stages, and questions about personhood, what it is to be a "human being" in the morally relevant sense of the term (namely, not merely biologically human organism), whether indeed fetuses have "valuable futures like our futures" and more.

The suggestion that some people – women and girls – should be forced by the government and society to use their bodies in ways that nobody else (in particular, no men) is forced to do so is shocking and offensive for many people. That makes sense. But pro-choicers who respond to this shock by appealing solely to the vale of bodily autonomy do seem to be making a mistake that's harmful to their own cause, which isn't smart, wise, or ethical.

In sum, it is neither morally wrong for anyone to refuse to use their body, or let their body be used, by being that's not a person or a conscious, sentient being nor should the law compel or force anyone to do that, and so abortion is generally not wrong and should be legal. And explaining why this so requires more than appealing to simple dogmas about autonomy. 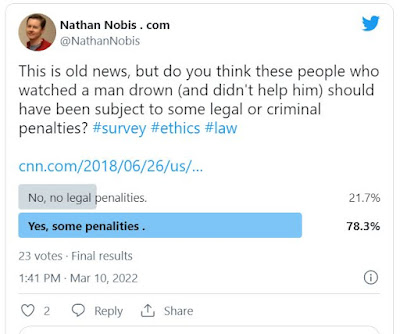