The topic of abortion often brings up the question of what it is to be a "person." And discussions of the concept of "personhood" can lead to a discussion of space aliens, believe it or not! Here I explain what the point of discussing space aliens is.

(TL;DR: the point is that the example of space aliens shows that the concept or idea of "person" is not same as "human being": personhood is a psychological concept; discussing the possibility of space aliens does not suggest that space aliens actually exist).

There are problems, however, with this simple reasoning.

A first, somewhat abstract problem is that just because something (or someone) is a person, that doesn't mean they have a right to everything they need to live. So, about abortion, even if fetuses were persons that wouldn't automatically mean they would have a right to their mother's body. This is Judith Thomson's point: the simple argument fails because the right to life isn't as simple as people often assume it is.

The second problem is that embryos and at least beginning fetuses just aren't persons, many thoughtful people argue. Why's that? Well, you need to figure out what persons are, or what it is to be a person.

Folks who haven't studied these issues, or have only interacted with people who they agree with on these issues and so have learned about these topics in contexts that encourage groupthink, often respond this way:

And maybe even more carefully, as an attempt at stating necessary and sufficient conditions for being a person:

Now, here's the question we need to ask people who say things like this:

This is a fair question though. To engage it, it can be helpful to reflect on our own personhood and think about why we are persons or what makes us persons. And this can lead to an understanding of personhood that implies that at least early fetuses, although biologically human organisms, are not persons. Briefly, this concept of personhood sees persons as psychological beings—beings with minds who are conscious and feeling and the like—and early fetuses are not like that.

At this point though, critics will want to challenge this assumption also, mentioned above:

if something were a person, it'd be a biologically human organism.

They will point out there there could be friendly, intelligent space aliens who are, in all relevant ways, are just like us—they are persons—even though they aren't biologically human. Again, why would they be persons? Because they are like us in having minds and being conscious and feeling and the like.

Now, in saying there "could be" such space aliens, nobody is saying that such aliens actually exist or are even likely. They are just saying that the concept of being a person is one that isn't confined to human beings: personhood is a concept that's based on psychological or mental characteristics, and so if there were non-human space aliens who were mentally and emotionally like us, they would be persons: e.g., ET was a fictional "personified" being, meaning he had the traits of a person: he was a person.

That's the point of thinking about space aliens in the context of abortion. 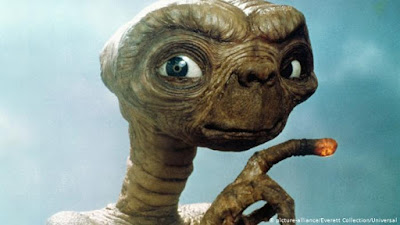