To support their claims, they observe that zygotes, embryos, and fetuses are surely alive, biologically: they came from living eggs and sperm and so are "life." And they are surely biologically human: they have human DNA and are of the human species; these aren't feline or canine fetuses at issue.

So what they say seems obviously correct to them, and this sometimes leads them to mock people who deny that human life begins at conception, asking things like this:

"How could these pro-choice people deny basic facts from biology and science, that fetuses are engaged in the processes of life and that fetuses are biologically human, that they are not some other species?!"

This rhetorical question (which is, unfortunately, usually left unanswered) sometimes leads to insults, name-calling, and worse.

Now, perhaps these types of responses are developed on the basis of interacting with people who claim that "human life does not begin at conception" but give uninformed, naive, or absurd reasons why they think that. Many people don't know much about biology, and so—if they say something to address what the abortion critic says—they just might not know or understand the evidence that the abortion critic appeals to in arguing that what they are calling "human life" does begin at conception. About these people, if they need to learn more about biology, then they really should. (What these abortion critics need to learn, however, will be addressed below).

But another possibility though is that the person who says "human life does not begin at conception" just has a different idea of what "human life" is or are using a different meaning of that term. So what they aren't thinking about is whether a biologically human organism is engaged in the biological processes of life, but something else.

What could this something else be? To better understand what they might be thinking or have in mind, we can ask the related question, "When does human life end?" This question will help reveal what they mean by "human life" and what they are thinking when they use this phrase.

I recently did a casual, informal Twitter survey (of random, unknown people) to ask about this. Here was the survey and the results (I ran the same survey on Facebook and got nearly identical results):

Adam is 40. He's in a car crash, with *major* brain damage. His body somehow remains alive but he's *completely unconscious* for 10 years, when his body dies.

This informal survey suggests that at least around 70% of people understand "human life" to be something different from merely biologically human life. A human body can be alive, yet that "human life" has ended.

So when does "human life" end? This survey suggests that many people might be willing to say this:

This answer at least suggests a view on when "human life" begins:

Human life begins when consciousness begins: when the ability to feel, be aware, think, and have any types of experiences begins, "human life" begins. And that happens after the beginning of the body.

What matters here is that nearly everyone is familiar with the ambiguity in "human life," despite what any critics of abortion say about this: they tend to think it's just simple and obvious what "human life" is. Philosophers, ethicists, and medical professionals (especially those who engage "end of life" issues) are familiar with the ambiguity of "human life"—meaning, that that phrase can be used to mean different things, or refer to different things—but, really, everyone is aware of this ambiguity: to better notice it though they sometimes have to be asked about it in the right way.

Earlier I mentioned that some people need to learn more biology. But people who think that the scientific facts that embryos and fetuses are alive, biologically human and even biologically human organisms and that pretty much means that abortion is wrong "need" to learn some literal logic and ethics (specifically focussing on questions about what makes killing wrong, when it's wrong) to understand that, no, these scientific facts do not entail that abortion is wrong: there are controversial assumptions that are part of that argument that need to be articulated and defended. So their simple "scientific" argument is persuasive to some, but it is a very poor argument, in terms of providing reasons to accept the conclusion, and that fact will likely catch up to this argument's advocates eventually. If they don't care about the fact that they are trying to persuade people with bad arguments, then I guess they don't "need" to rethink this; but if they wish to offer genuinely sound or cogent arguments, rethinking this all is a need.

So, in conclusion, when people are hostile to folks who deny that human life begins at conception, what's probably going on is this: they simply haven't asked that person what they mean by "human life" and/or they haven't found someone who is knowledgable about these issues to explain what they mean. The insults and ill-will result from people failing to attempt to understand each other. It's a predictable result of not making the effort to find out what people are thinking when they seem to disagree.

It's also a result of, honestly, people not knowing as much about complex issues as they think they do (and so acting like a "know it all" when you're a "don't know much") and being part of a mob or cult about an issue, as opposed to being someone (and parts of groups) who is willing and able to try to think about issues in, honestly, more fair and balanced ways. About abortion, almost nobody takes classes on these topics; almost nobody reads broadly on these issues; honestly, why would the typical person really know much about the issues—from all sides—so they can explain things accurately? That type of understanding is simply discouraged by most groups and people who are enthusiastic about the issues.

These are all common problems, about many issues, and they are especially problematic here. What can be done? A lot, but as a start, a good practice is always asking this:

What would people who disagree with me on this issue say about this? How would they explain what they think about this disagreement? Am I representing their views correctly?

And here the goal is to find the best person who disagrees with you: the most informed, the most thoughtful, not someone who knows little but thinks they know a lot. Doing this—and not being a "drive-by critic" or someone, or part of a mob, that offers potshots from a distance, would do a lot of good for contributing to positive discussions, about this issue and many others. Daniel Dennett has other good suggestions for positive engagement.

How's this sound? And what are other good ideas to improve discussions of controversial issues?

All blog posts are here! Some especially relevant ones: 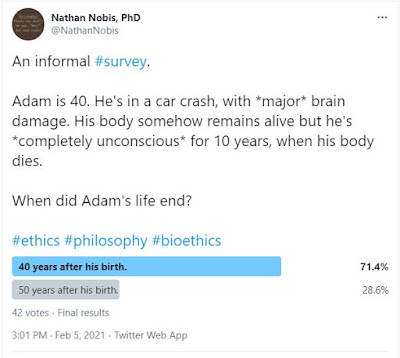 Email ThisBlogThis!Share to TwitterShare to FacebookShare to Pinterest
Labels: when life begins