Why bodily-autonomy arguments for abortion are not sufficient, and may be harmful, again

A wise and insightful Twitter thread from "Small Garden Ghost" on why appealing solely to bodily autonomy arguments is unwise and potentially counter-productive, to add to the discussion at "Is the "bodily autonomy" argument for abortion that simple?" post (also see the more recent and "Is "About abortion, all that matters is bodily autonomy!" true or useful? No."):

I absolutely think bodily autonomy arguments for abortion are successful. But I spend way more time giving arguments like this for abortion rights, and I want to explain why I think it's so important for feminists to pay attention to personhood arguments. https://t.co/bLX1uOSFUJ

And that's awful, particularly because there's *NO REASON* to think that abortions involve "killing people" or "killing babies". I mean, imagine if we fought for, say, gay marriage this way:

"Look, let's assume that conservatives are right that homosexuality is sinful. The thing is, we still can't stop gay people from having sex. We have to keep gay sex legal. We can only hope that homosexuals don't do it.

That would be an uninspiring and ineffective way to fight for gay rights, particularly because there is *no reason* to accept the conservative view that gay sex is immoral. You can just point out that the reasoning given for thinking it's bad in the first place makes no sense!

But this is what people do for abortion all the time. "Let's assume this insane idea - that conception is a quasi-magical event that causes a person with a right to life to exist -is true. Well, we still can't stop women from getting abortions.

Reject that assumption! There are *so many* good arguments out there about why that assumption isn't correct. And there are so many good explanations for why popular pro-life arguments don't work. We just need to use them.

We don't have to defend abortion rights as a bad thing women just have to be allowed to do. We can point out that there's nothing problematic about abortion in the first place - no more than in any other form of birth control. Don't give up ground that doesn't need to be ceded. 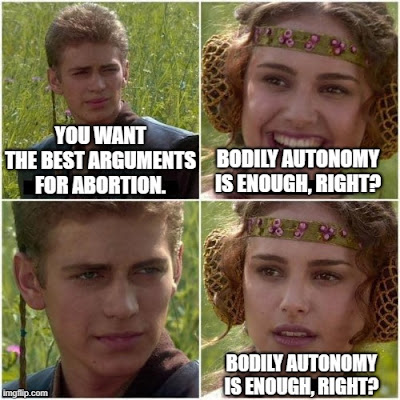 Email ThisBlogThis!Share to TwitterShare to FacebookShare to Pinterest
Labels: autonomy