Is the "bodily autonomy" argument for abortion *that* simple?

Some claim that the abortion issue is simple: the right to bodily autonomy justifies the (legal and moral) right to abortion, and that's all that needed to justify abortion: it's as simple as that.

Maybe "nobody has a right to use anyone else's body without their consent" will do it. Maybe.

At least, more than a few people don't think it's that simple. And this should motivate thoughtful people to understand why it might not be so simple. This will at least help people better engage the people who don't find it so simple, right?

Let's think about it a bit.

To begin, the backstory here comes from, or can come from, philosopher Judith Thompson. She's got a famous example, a thought experiment, involving a famous violinist who needs to use your kidneys for a while to stay alive: if you don't help him, he'll die.

Now, the violinist is a person, with the right to life as much as you or me. But does the violinist have a right to use your kidneys? If you don't let him, do you violate his rights?

The upshot is this: the right to life does not include the right to anyone else's body, even if that body is needed for someone's life to continue.

So, at least, the very common, yet simplistic claim that if fetuses are persons with the right to life, then it immediately follows that abortion is wrong, is mistaken. For this argument to succeed, fetuses would have to have a right to the woman's body, which they don't have, since nobody has the right to anyone else's body.

That's the point, which is often misunderstood. The point isn't a comparison of fetuses to violinists, since the situations are, in some ways, importantly different: the point isn't any analogy. Again, the violinist case is used to show that the right to life does not include the right to anyone else's body, and that insight then is applied to abortion.

So what are some concerns here that make the issues not as simple as it might seem?

A first is this: not all moral or legal obligations are due to rights.

You are morally obligated to be kind and respectful to everyone you meet: if you are rude and mean, you have probably done wrong. But did you violate people's rights by being rude and mean? I'd say not.

The same message seems to be true of the law: you can be legally required or legally obligated to do something, even though it's a stretch to say that anyone has a right that you'd be violating by not doing that thing.

So the point is this: just because the violinist doesn't have a right to use the person's body, that person could still be morally obligated to help him, using their body. Rights aren't the whole of morality, and other moral concerns could create a serious moral obligation here. As for the law, perhaps there could be laws that compel behavior to benefit others (in fact, there are not: "Good Samaritan" laws typically only protect people who have tried to help others from forms of retaliation for providing that assistance) so there could be legal obligations here also, and ones that don't really depend on rights, strictly speaking.

Now, maybe there aren't any such non-rights-based obligations here, but there could be. And that contributes to the issue being not so simple.

A further concern is this: maybe people sometimes have rights to other people's bodies. Maybe, contrary to what seems to follow from Thompson's insights, the right to life does include the right to anyone else's body when that body is needed for someone's life to continue.

This idea can be motivated by a simple case that's been around for a while:

There's a child drowning in a fountain, who you could easily and safely easily save from death. However, to save the child, you will have to either:

(a) use your body, e.g., your hand, to hit a button to drain the fountain and save the child,

(b) quickly sell some of your blood, from your body, to get $1 to put into a machine to gain access to that button (say there's a cover that will come off if you put $1 in it) or

(c) you must cut off some of your own skin, from your body, to put into that machine to get access to that button (say there's a cover that will come off if you put some skin in in it): that will hurt, but the skin will grow back.

Now here you are morally obligated to save the child, right? It would be wrong to let the child drown here. And some would say the child has a right to be saved: do they?

If this is all correct, then, again, the bodily autonomy argument is not so simple. Contrary to what the "my body, my choice!" chant, there can be situations where you are obligated to use your body in certain ways, and maybe others even have a right to your using your body in ways that benefit them, which seems to be a right to your body. And maybe this should even be a legal obligation, maybe.

Now, of course, pregnancy and childbirth make very different bodily demands than the case above. (Some important differences: saving a drowning child is usually a one-time-thing, whereas pregnancy is 24-7 for 9 months; pregnancy obviously affects the woman's health and overall sense of well- or ill-being; pregnancy happens in and with her body and her life and changes her whole world and future: it is identity-changing; pregnancy can't be "outsourced" to someone else, whereas someone else can save the child; a woman can't take a break from pregnancy, whereas any drowning-child-savers can; childbirth is much harder than saving any drowning child, and much more!). And the violinist case is very different from the case above also. But if the case above refutes the simplistic understanding or presentation of the issues, then the details matter, which is my point.

Are these situations similar to what's found in cases of abortion though?

Not at all. The clearest cases where someone might have a right to someone else's body are cases where a person needs the use of your body.

To personify something is to give it person-like traits which include consciousness, awareness, feelings, beliefs, memories and the like: in short, a mind.

The drowning child was a person in this clear sense of the term.

An early fetus, however, is not a person in this sense since they aren't developed enough for any kind of mental life necessary for personhood: 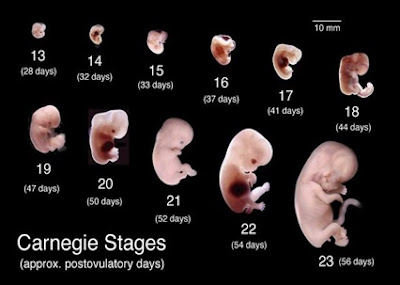 And most abortions are of early fetuses that lack any kind of consciousness or awareness, and haven't yet had anything like that. They aren't persons and so they are not like the best cases to motivate the thought that we sometimes have rights to others' bodies or, at least, others are obligated to use their bodies to help us.

So the more accurate thoughts here seem to be this:

About the first principle, we'd have to address the details: when can you have such an obligation? When is asking too much? Again, the details matter; things aren't so simple. But, this suggests that someone, if they want to appeal to any arguments for bodily autonomy to justify abortion, they might wind up having to discuss the idea of personhood, so they should be prepared for that.
A lot of these discussions and debates (at least with philosophers) involve assuming, for the sake of argument, that beginning fetuses are persons. While there's a time and a place for that, there's also a time and a place - like here and now - for not making that assumption and thinking about what's actually true regarding the personhood of embryos and early fetuses. Again, the more people are prepared to thoughtfully engage these discussions, the better.
5.
To some, this might seem all quite obvious. Maybe they would say that they meant all this in saying things like "My body, my choice" and "Nobody has a right to anyone else's body."
While I doubt they meant this, I am sure that almost nobody - especially any critics of abortion - heard them this way. They, and others, hear these phrases and perhaps think they would justify callous indifference to the needs of others; perhaps they imagine people appealing to these phrases to "justify" their not saving that drowning child. (An ad hominem question: don't these same people usually routinely fail to help the many "drowning children" of the world and systematically encourage policies designed to not help such needy people? Hmm.) This is also important since what abortion critics often picture in their minds about abortions is likely not accurate to most abortions: they picture far more developed fetuses than, at least, what fetuses are like in most typical abortions, and these pictures don't convey any complex information about whether and which fetuses feel anything or are conscious.
Recognizing that things are not so simple here and why the "My body, my choice" and "Nobody has a right to anyone else's body" slogans would not justify letting children drown but can justify abortion, given the relevant differences between early fetuses and born children, is important. Acknowledging complexity is often better than appealing to inaccurate and misleading simplicity, especially when those simple appeals are not working. So let's hope that happens since it can only help.

P.S. David Boonin has an excellent newish book on these issues: Beyond Roe: Why Abortion Should be Legal--Even if the Fetus is a Person.
P.P.S. It's also worth pointing out that some claim that the fetus has a right to the woman's body because she did something that contributed to its existence and its "need" for her body. ("Need" is in quotes because it's unclear how this need should be understood: you and a plant both need water, but the needs of conscious, feeling beings are different from the needs of non-conscious entities).
In response, it's a fair observation that almost nobody who says this tries to plausibly explains how or why this might be so: they just assert this, without explanation or defense.
On one way of thinking it through, the claim appears question begging or circular: the fetus has a right to her body because she did something that lead to the existence of a fetus that has a right to her body.
Some suggest that there's something like a "contract" that gives this right, although nothing resembling any contract or agreement is in place here: nobody can make an agreement with non-existent person and the fact that whether an egg is fertilized and a women becomes and stays pregnant is out of anyone's control is surely relevant also. In short, this "contract" would resemble no known valid contract that we are aware of.
Finally, there's the suggestion that since born children have rights to assistance (and so rights to someone's body?), early fetuses do also. An important difference here, however, is that born children are persons - conscious and feeling and more - whereas early fetuses are not.
All other blog posts are available here: here are some of them:
By Nathan Nobis