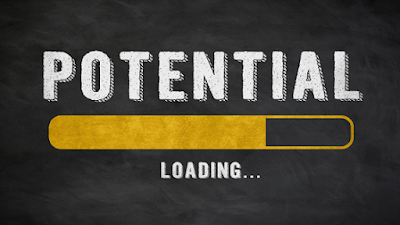 "An argument from potentially" is often reviewed in discussions of abortion:

At least, when pro-choice people review the arguments, they include this one even though, in fact, probably few actual critics of abortion accept or offer it. Why's that? Because they usually claim that fetuses are "persons with potential," not "potential persons." So they deny premise 2.

3. Potential people have the rights of actual people.

The next question is: "Why think that?" After all, this general principle is false:

4. For anything X, potential X's have the rights of actual X's.

Potential presidents, doctors, lawyers, judges, spouses, parents, autonomous beings, senior citizens, and on and on don't have the rights of actual ones: these are, of course, the rights uniquely associated with being an X: not universal rights. (Note: this point is stronger when we focus on cases that involve natural or moral rights, not any legal rights anyone has by convention, especially arbitrary convention [e.g., driving age minimums are somewhat arbitrary: if it's 16, it could have been 17, or 15.5]).

So, the generalization (4) is false. That doesn't entail that 3 is false, but it does show that 3 is an instance of an at least often false pattern. We definitely should not believe the argument to be sound; to reasonably believe it's unsound, though, we'd need a great reason to think 3 is false, not just unmotivated or unjustified, and I'm not sure we have that.

So anyone advocating for (3) is at least, running against the grain, so to speak. They are saying (3) an exception to the rule against thinking that potential things have the rights of actual things. Of course, the question is, as usual, "Why think that?"

A recent answer I've seen amounts to this: many rights we have "in potential," such as the right to health care or, to use a perhaps less controversial example, the right to food if we are starving to death. (That food we can see as a type of healthcare too, if we want).

So, your potential for starving is what gives you the right now to be fed if you were starving. That's the proposal.

The claim was this:

Non-starving (potentially starving) people currently have the right to be fed if they were starving, in virtue of their potential for being a starving person: if and when they are starving, they must be fed, and that's true of them now, even when they are not starving.

Can a parallel be made with fetuses? Does something like this work? Recall, of course, that we are assuming here that fetuses are potential persons:

Fetuses (as potential persons) currently have the right to life, in virtue of their potential for being persons: if and when these [fetuses] are persons, they must be treated as persons: that's true of fetuses now, even when they are potential persons.

So what's going on here?

One thing is that we never explicitly asked what the right to be fed if we are eventually starving is.

A quick observation is that this is a right about how we must be treated if we change in important ways: if we reach the state where we starving, that's when someone must act. If we are not starving, nobody needs to do anything for us (at least regarding this).

The suggested parallel then is that if a fetus has the right to life in virtue of it's potential for being a person, it would have to be treated like a person when it becomes an actual person. At least, that's what's suggested by the suggestion that the right to life here is or would be analogous to the right to be fed: with the latter, nobody has to do anything for you until you are actually starving, and with the former nobody has to do anything until the fetus is an actual person. And so that doesn't seem to imply anything for when the fetus is not a person, or is just a potential person. So the suggested analogy or parallel doesn't seem to work out.

These are some quick thoughts on this matter. In short, yes, your potential for starving is partly why, if you were starving, someone would be obligated to feed you, but that doesn't seem to support thinking that if something is a potential person, it must be treated like an actual person.

This, of course, doesn't even bring in objections-to-Marquis-type concerns that a fetus cannot literally become person, since a never-minded thing can't be identical to an essentially minded thing--but that's another more complex matter.

Please let me know if I've made any mistakes and, more likely, if there are better ways to think about these issues and rights that depend on potentials versus those that don't.

Note: the above updates in red are some corrections I made in light of some comments that I think I put in the 'comments below'.