Why "Pro-Life" is Misleading and Inaccurate and so 'Anti-Abortion' is Better: A Dialogue

Suppose someone was really ignorant of political and ethical debates about abortion. They know what abortion is, but just don't know anything about "the controversies" on the issue, including the names of the main "sides" of the "debate." What would such a person think of the label "pro-life"?

Let's listen in on a conversation, a little "play," with someone knowledgeable about these issues, played by "A", and this person, as "B".

A: What do you think of those "pro-life" people?

B: Who are they? I've never heard of them.

B: Um, people who are really pro - life? Like, they are really "into" life and supportive of life? Like those radical environmentalists, who say that all living things matter, including plants and insects? I think they are even concerned with "life" more broadly, like ecosystems too?

Are either of these who "pro-life" people are?

B: OK, was I too broad? I don't suppose that type of environmentalism is really all that popular anyway. So are "pro-life" people "pro" not just anything that's alive, but "pro" sentient life? Are they the animal rights people? Animal rights people are human rights people too, of course.

A: Again, no. But your strategy of narrowing things here is a good one. Keep on narrowing it.

B: Well, I actually know something about animal rights or animal welfare people, and I don't think they call themselves "pro-life."

So are "pro-life" people then just human rights advocates? Like Amnesty International?

B: Oh, OK. But that's kinda confusing. Why don't think they just call themselves "people who oppose abortion"? Or "critics of abortion"? Or "anti-abortion"? Or "defenders of fetal life," to get the "life" back in?

A: I really don't know. But I agree that would be better since it'd be clear what their view is actually about. "Life" is so broad that it could be almost anything! Well, anything alive.

B: So, these people who oppose abortion, I have a question about them, or their views.

B. So, they are opposed to abortion. That means they don't want people to have abortions. But how do they do that? Is the idea just to try to prevent abortions—like trying to stop people from having abortions—or is it to try to make it such that there is less "demand" or want or "need" for abortions in the first place to there wind up being fewer abortions? Does that make sense? I suppose they could do both too.

A: Yeah, sure. I understand what you are getting at.

I suspect that people who really oppose abortion are divided on this. Some of them are really just concerned about there being fewer or no abortions—since they typically see most abortions as involving the intentional killing of a human person, or something like that—and so their focus is on trying to stop people from having abortions.

Others though I suspect are more, I'd say, thoughtful and realistic, and so they recognize that abortions happen for reasons, and so sometimes those reasons can be addressed and so the woman or girl would decide to not have an abortion. And, of course, things could be done to reduce unwanted or unexpected pregnancies in the first place, like more readily available birth-control options, and so the issue doesn't even arise in the first place.

So it's kinda like there are, on the one hand, people who fight criminals to reduce crime, and then there are folks who are like, "Let's change things and try to address whatever is causing the crime, so there's less crime in the first place." At least about crime, both are needed, but the second group is more "big picture" in their approach to reducing crime.

B: Hmm. Is either type of abortion critic more common?

A: I'd say definitely the first kind is more common and vocal. They are the type that lead pro-choice people, and even just people who really don't have enthusiastic views on the issues, to often say things like that "so-called 'pro-life' people only care about people until they are born," that "they are just 'pro-birth' not genuinely pro-life," and the like. They think "pro-life" sounds like a lot more than just being "anti-abortion," since that really is what you'd expect from that label.

The other side—that might have a more comprehensive strategy for trying to reduce abortions and unwanted pregnancies—doesn't get much notice, as far as I can tell.

A: I don't know. Maybe they'd say it's due to some media conspiracy and so these efforts exist but aren't much reported on, but I don't know about that: if they really were proposing big-picture changes to help pregnant women, especially in systematic and profound ways, you'd think that'd get more notice. But maybe not.

Maybe they'd also say that pro-choice people just want to be willfully ignorant of all their hopes and plans to make things easier for women to be pregnant and have children. But I don't know about that either since people and organizations tend to seek "good press" and look cooperative, and this would be that.

Maybe the opposition—the other people who oppose abortion, but don't seem to have much interest in helping people in positive ways, even in ways that would reduce the number of abortions—just have more influence because they think it's just far more important to try to actively prevent real-world abortions that would happen than to help anyone out in other ways: maybe they think that getting that type of help is less important than trying to prevent abortions.

Maybe that makes sense, if you think abortion is a super horrible evil thing: maybe you'd think it's more important to try to actively prevent intentional killings than to, well, do other things that would ultimately lead to fewer intentional killings. Honestly though, that probably doesn't make sense.

I suspect though that this type of "let's help babies and pregnant women and families" and "let's reduce the number of unwanted pregnancies" doesn't fit very well with the typical "politics" of the most vocal and influential anti-abortion advocates. These people, of course, tend to claim that abortion is just horrible, but they also seem to think that universal health care would also be horrible—they tend to oppose the Affordable Care Act, or Obamacare—and tend to call any government efforts to help people "welfare" and "socialism": they are suspicious of "Big Government" and advocate for so-called "personal responsibility."

But more readily available healthcare and, say, some kind of Universal Basic Income, even if just for some times' in people's lives, surely would reduce the number of abortions! Yet the states where there are these new abortion bans and attempts to restrict abortions seem to be very hostile to actually supporting people in ways that would reduce abortions. And, of course, Republicans nearly universally oppose these sorts of things.

B: So the whole "Let's help pregnant women so they don't feel like they 'need' to have abortions, and help them not get pregnant (if they don't want to be pregnant) in the first place" message doesn't really fit with their other political agenda?

A: Seems like it. I'm sure there are exceptions, but they aren't well known.

Maybe they want churches to help people in these ways, but it's not like a church can provide people with healthcare and adequate income to have a baby with, and a family: it's hard enough to get all that even with just a normal job (and there are typically pretty big out of pocket costs for having a baby too: it's not like it's just "free" if you have health insurance). And I suppose not many churches would want to get involved in distributing contraception. Maybe I'm listening in the wrong places, but at least I never hear about anti-abortion efforts like these from churches, or any people who oppose abortion.

B: That's interesting, especially since these people often claim to be religious, right? So much for the whole "love your neighbor" bit here, even if loving your neighbor would reduce the number of abortions!

A: Yeah, it's odd. The mainstream view seems to be like, "We're against killing fetuses, but we're not really in favor of helping anyone else." Kinda libertarian-ish, I guess. It is, however, not an inconsistent view, although the part about "Well, we just want to stop people from killing fetuses, yet we don't think there's an obligation for society to do things that would lessen that killing" does seem hard to understand.

B. Huh. Yeah, I agree. Whatever their views are though, "pro-life" doesn't seem to be an accurate label!

B: Oh, another thing that I wanted to say earlier, along the lines of the "if people were really 'pro-life' they would do this and that to try to reduce abortions" is that there are these claims that if anti-abortion people really believed what they say they do, they would be trying to prevent IVF, in vitro fertilization practices—since that results in the death of embryos—and that they'd be lobbying to try to find ways to reduce or prevent miscarriages, since those result in the death of many, many embryos and fetuses.

Now, they will often say that nothing can be done about most miscarriages, but I don't know that they really know that, and it seems like—given the huge number of deaths of embryos—they'd be campaigning for directing research towards that. I mean, if they think that embryos are "people," then all the "people" that die in miscarriages would seem to be a super-awful thing, worse than cancer and diabetes and many of the other problems society pours money into.

About IVF, I don't know why they don't try to ban that, or even vocally oppose that: it's not like they picket places that do IVF.

So it seems like if they really believe what they say they do, we'd expect them to advocate for different things than they actually do, although they might just not have thought about this, or they have some explanation why they seem to ignore it, at least for the most part.

A. Maybe you don't see much about IVF and miscarriage-prevention since that involves the death of embryos, those "life" or "lives" ending, but without killing?

B. Yeah, good point. And, again, it seems at least a bit odd to say that you are really only opposed to deaths from killing, but not all that opposed from deaths from other causes.

A. Indeed and, again, that doesn't sound so "pro-life." 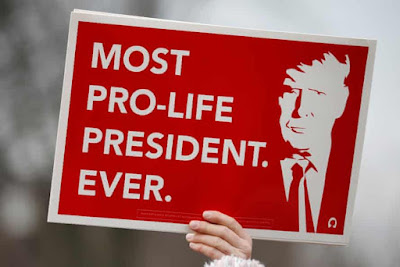