No, Being Pro-choice is Not Ablest: Abortion and Ableism

I've recently seen some abortion critics call a certain type of argument in defense of abortion—ones that appeal to the total lack of minds or consciousness in zygotes, embryos, and at least beginning fetuses—ablest. Arguments that deny that fetuses are persons tend to be arguments like this, since they usually understand "persons" in terms of psychological characteristics or having a mind.

This objection, however, is a bad objection. This type of argument in defense of abortion is not ableist, and I bet this charge is an offensive comparison to people who are genuinely affected by ableism.

To begin, here are a few definitions of ableism:

So ableism is discrimination against people, against individuals, who are judged negatively because of their abilities, or because they lack certain abilities.
Once we review the definitions of ableism, we readily see that embryos and early fetuses cannot be victims of it. This is not because of what abilities they have or lack, however; it's because they are completely without abilities: there is no individual or person there who has or lacks any abilities.
Ableism involves seeing someone and thinking they are less valuable or worthy of respect because of their physical, cognitive or emotional abilities. But with embryos and early fetuses, there is no someone, no conscious individual, who has or lacks any abilities. Ableism requires that there be a someone who is judged negatively, but there is no "someone" when there is an embryo or beginning fetus, so the charge of ableism makes no sense.
To further make the point, imagine you ask me what my friends Mary and John are like. Suppose I respond with this:

"Mary is a is a good listener who enjoys ice-skating, watching old movies, crossword puzzles and rock climbing. And she's a person."

"John likes ice cream, is often rather quiet, is really good at math, and likes to read. And he's a conscious, thinking and feeling being."

It's weird to add on "and she's a person" and "and she's a conscious, thinking, feeling being," because I've already said this by telling you what they are like in these other ways. Only persons and conscious beings have these interests and abilities so it's redundant to point out that these friends are persons and conscious beings: indeed, we were probably even told by that by the word "friend."

So, arguing that abortion is not wrong because embryos and beginning fetuses are entirely without consciousness or minds is not ableist. The accusation just doesn't fit when there is no subject or person or conscious being: if there's no one like that, there isn't anyone who has or lacks abilities and so the charge of ableism doesn't make sense.

I suspect that many people who are genuinely affected by ableism would find the suggestion that their experience with ablemism is comparable to the "experience" of fetuses offensive. Here's some important discussion:

Who is Affected by Ableism? Ableism can affect almost anyone whom society stereotypes as not being part of the mainstream. WHO? The hearing impaired; the visually impaired; those who use mobility equipment; those with congenital anomalies; those with speech or motor impairments; those with diabetes, depression, asthma, arthritis, attention-deficit hyperactivity disorder, migraines, epilepsy, AIDS, hemophilia, etc.

Ableism affects the lived experience of these people: it affects their experienced world, for the worse; it diminishes their self-conception and sense of self-worth; it negatively affects their quality of life.
The suggestion that embryos and early fetuses are "like" these human beings, in that they both victims of ableism, is not just false, I'd say it's offensive. To compare the experience of someone affected by ableism to the non-experience of a being that's never been conscious or had any experiences is, well, disrespectful to people who are genuinely affected by and experience ableism. To say to someone who experiences ableism something like, for example, "Embryos used in embryo experimentation are discriminated against because of their lack of abilities and that is similar to how you are discriminated against because of your abilities" is not just a false comparison, it's an offensive comparison: it just fails to understand ableism and why it's wrong.
In sum, the appeal to "ableism" in arguing against abortion, is similar to the appeals to "equality," "anti-discrimination" and "human rights" in arguing against abortion and attempts to make opposition to abortion sound like opposition to racism and sexism. These are all attempts to make opposition to abortion sound "progressive" and present concern for embryos and fetuses as part of the "expanding circle" of moral concern. But these "liberal" concerns simply don't apply to pre-conscious beings like embryos and early fetuses and so these attempts fail and mislead. The more people willing to take the time and energy to reflect, notice and understand this, the better. 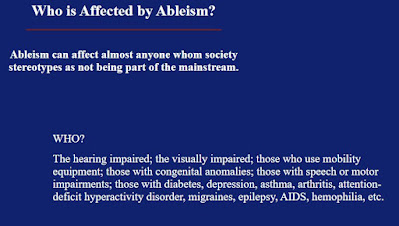