People sometimes begin discussing abortion by asking questions about abortion in particular circumstances: “What if it’s needed to save the mother’s life?” “What if the pregnancy is from rape?” “What if there are severe fetal abnormalities?” and so on. Or they begin by stating circumstances where they think abortion is wrong or not: “It’s wrong if used for ‘birth control’,” “It’s not wrong if the woman is too young to be an effective mother,” and so on.

Some people also want to focus on important, but comparatively rare, abortions: for example, of pregnancies from rape (perhaps 1% of abortions) or incest.[5] Our initial focus will be on more common circumstances where for a variety of other reasons, a woman is pregnant but does not want to have a child (or another child, now). After this we will discuss other important, but less common, circumstances.

We can immediately set aside circumstances though where the woman would die if her pregnancy continues, and so the fetus will die also, or we must choose between the mother and fetus. Even people who generally oppose abortion typically argue that we should save one life instead of losing two lives and prioritize the mother, not the fetus. Their view then is not that abortion is always wrong, but that it is wrong in most circumstances, or prima facie wrong.

Whether this specific conclusion, and any other, can be supported with good arguments is {or should be!] our concern.
From Early and Later Abortions: Ethics and Law: Early Abortions Are Not Wrong, Late Abortions Could Be Wrong, but probably All Abortions Should Be Legal 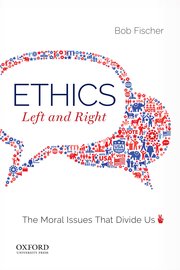 In Bob Fischer, ed., Ethics, Left and Right: The Moral Issues That Divide Us (Oxford University Press, 2019).
By Nathan Nobis