Many medical procedures are ethically similar to abortion — but without the outcry. Why? 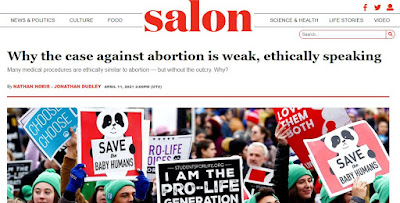 The article really is about more than what the title suggests. Here's an important paragraph:

Enabling more people to more productively engage the many ethical arguments about abortion won't, by itself, solve any social or political problems: no single strategy would. But ethics education is an essential part of any successful comprehensive strategy to ensure abortion rights and access, and so pro-choice advocates should engage in it. More generally, our political culture needs genuinely fair and balanced, honest and respectful engagement of arguments and truth-seeking: more people practicing this with the complex topic of abortion would help set a better intellectual and moral tone that would enable us all to better engage the many other polarizing issues that confront our society.

Some critical responses that we've see are here:

Dear Ms. Yoder,
Thanks for this response. I am curious though about your claim about babies: do you really think that babies aren't conscious or aware or feeling? Surely you have been around a baby, so why do you suggest they are not conscious?
Second, you write that "it’s wrong to commit an action with the sole purpose and intent to end the life of an innocent human being." But that's not the sole purpose and intent behind abortions: the main purpose is to end pregnancies, for a variety of reasons.

If you meant to say that "it’s wrong to commit an action with the purpose and intent to end the life of an innocent human being," the point of the article was to observe that if that's true, then killing human beings for organ donation is wrong, as is letting anencephalic die. But these aren't wrong, although they involve "intentionally destroy[ing] the life of an innocent human being"--and this is best explained by their lacking a functioning, consciousness-making brain, and so at least early abortion is wrong. Yes, there are differences here, but they don't seem to matter. For more on that, see Thinking Critically About Abortion at www.AbortionArguments.com