We thank Katie Yoder for reading our Salon article “Why the case against abortion is weak, ethically speaking” and responding to it in her “TownHall” article, “Salon Piece Says ‘Pro-Choice Ethics’ Prove Abortion Isn’t Murder.” 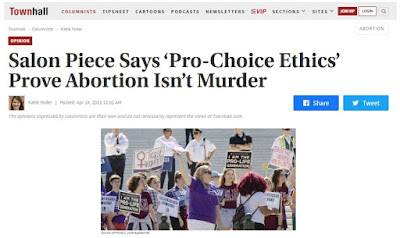 As we note in our piece, the central argument against abortion made by the Catholic Church and most evangelical denominations and pro-life groups is that abortion is wrong because it is wrong to intentionally kill an innocent human being. This is also the argument made by Ms. Yoder: “the pro-life stance is a solid one: Life is precious, and abortion intentionally destroys the life of an innocent human being.

We argue in our piece that this argument, if sound, means that widely accepted organ donation procedures are also wrong. (We also discuss the treatment of anencephalic infants, though because the argument here is less direct than the argument from organ donation, we’ll focus on the latter).

Although Ms. Yoder identifies a number of disanalogies between these procedures and abortion (discussed below), they have no impact on our argument because these procedures both share the relevant similarity of intentionally killing an innocent human being. According to Ms. Yoder, and most pro-life organizations, that is what makes abortion wrong.

We provide an alternative ethical framework that makes sense of the widespread belief that such organ donation procedures are not wrong: they affect human beings without brains that allow for consciousness or feeling or awareness. Yoder notes that such organ donors have given consent, but clearly this isn’t what makes the procedure permissible since few people would think it’s okay to remove all of the vital organs from (and thereby kill) a fully conscious person who has given consent (even if that person’s life was almost over anyway, another difference Ms. Yoder notes).

In a further search for disanalogies, Ms. Yoder says abortion is different from these organ donation procedures because “it’s wrong to commit an action with the sole purpose and intent to end the life of an innocent human being.”

But, clearly, the sole purpose of abortion is not to kill an innocent human being. If this was the case, then that purpose could be realized by killing any innocent human being, including an adult. The purpose of abortions to end pregnancies that, for a variety of reasons, women don’t want to continue. Killing a human being may be the sole means to that end, but it is also the sole means to the end of obtaining vital organs for transplant from permanently brain dead but still living human beings.

Finally, in attempting to rebut the relevance of consciousness for moral status, she suggests that babies aren't “consciously aware” until 12 to 15 months after birth. She suggests that our alternative ethical framework would imply babies have no moral value until that point.

To support her suggestion that babies aren’t conscious, Yoder references a medical article that’s about a type of higher-order thought capacity (e.g., thinking about thinking, being aware that you are aware) that develops much later after infancy. But here she is simply confusing the basic concept of consciousness with a related, more complex concept, and this understanding of consciousness depends on that more basic form of consciousness that we focus on, which babies clearly have.

Rooting moral value in the possession of a brain capable of consciousness means that moral value begins when such a brain begins to exist (in the second half of pregnancy) and ends when such a brain ceases to exist. “Brain death” is a well-known and morally significant concept, but analogous concepts for the beginning of life—“brain birth” or being “brain alive” —are not well known, but should be.

So, yes, there are some differences between abortion and these cases from medical ethics: the challenge though is to explain why these differences are important and to just explain why abortion, at least of beginning fetuses, would be wrong.

While extremists on both sides insist that the truth about abortion is simple and obvious, the truth is these matters are complex—involving many hard questions such as ‘What makes us wrong to kill?’ ‘What are we, fundamentally, our minds or our bodies?” “When do our lives end, and when do our lives begin?’ and more—and arguments about it are challenging.

We do hope that Yoder’s article encourages readers to learn more about these complex issues and work harder to really understand the claims and arguments they might disagree with. When people really understand those arguments, they often find they have merit, and when they engage people they disagree with, they come to understand that they have some good points and good intentions. And so we conclude on what was perhaps the most important line of our article:

[O]ur political culture needs genuinely fair and balanced, honest and respectful engagement of arguments and truth-seeking: more people practicing this with the complex topic of abortion would help set a better intellectual and moral tone that would enable us all to better engage the many other polarizing issues that confront our society.

We encourage Yoder and any readers here to help make this be so.

For further reading, see Nobis’s & Grob’s Thinking Critically About Abortion and Dudley’s Broken Words: The Abuse of Science and Faith in American Politics and “When the ‘Biblical View’ for Evangelicals was that life begins at birth.”