There are "extremists" about many issues: big, important issues and even small, trivial issues.

About abortion, the "extremists" most of us are familiar with are "pro-life extremists" who have sometimes used, or encourage, lethal violence against abortion providers. And there are, of course, many less extreme anti-abortion extremists.

But there are pro-choice extremists also. Knowing what their extremism is like, and why it's a problem, would be good to know about. This short post explains the issues and offers some suggestions for how to address their extremism.

Philosopher Spencer Case has a recent blog post "What is Moral Extremism and Why Should We Care About It?" His post gives an overview of his recent academic article on moral extremism from the Journal of Applied Philosophy.

So, what is an extremist, according to Case?

"Roughly, a person is an extremist just in case an intense moral conviction blinds her to competing moral considerations, or else makes her unwilling to qualify her beliefs when she should" (emphasis added).

Case doesn't discuss abortion in the blog post, but, given his definition, it seems clear that some pro-choice people are extremists about abortion.

Why's that? Because some of them not-infrequently say things like this:

These are all things that people would say when, as Case puts it, "intense moral conviction blinds [them] to competing moral considerations."
2.
So claims 1 and 2 suggest that the person thinks that there's just nothing semi-plausible to say against abortions and so immediate, complete dismissal of any objection, and even questions, is appropriate.
Now, while I argue that abortions are usually permissible and should be legal, I do not think that many of the considerations and concerns raised against abortion are just absurd or ridiculous, as pro-choice extremists seem to think. I think that the concerns of abortion critics are usually based on misunderstanding the issues, misinformation, and a generally inadequate understanding of how moral arguments work (which is not surprising, since [unfortunately!] most people are not very interested in learning how to better think about complex philosophy, ethical and scientific issues.) Also, this is an issue that people are especially inclined to "make up their mind" on—for initially adequate reasons—and then seek out rationalizations of those beliefs.
This outlook, however, is not that we should not discuss or debate the issues: it's that we should, since if we do this in good will, we might come to better understand each other and our minds and hearts might change, for the better: we will learn that at least some of our arguments are bad, and we might find some good arguments, and we might recognize this and change our views. For anyone who has never tried this, they might not know that this is possible; and, of course, some people might try this without much insight into how to do this more productively and effectively and so come to think that positive outcomes are impossible to very unlikely. So that takes us to saying 4 above and the false, inadequately supported general assumption that minds can't be changed on the issues: they can, and they often are, and people can learn how to better do that.
Saying 3 suggests something like a conspiracy by men to control women on this issue. So it assumes that it just couldn't be that people at least believe (even mistakenly or falsely) they have a good reason to oppose abortion. (Also, why would men seek to control women on this issue but not many others?). Again, intense moral conviction blinds people to potential competing moral considerations. It also seems to blind people to just the basic facts that many women oppose abortion (and many men are pro-choice!), an observation that is sometimes met with the charge that these women are brainwashed against their own interests (which appears to be disrespectful to these women: they might be mistaken, but surely they can genuinely think for themselves). Again, another possibility is just that these women believe they have good reasons to think abortion is wrong, which the pro-choice extremist dismisses, without reason or engagement.
Finally, saying 5 suggests that no "compromise" is ever warranted on these issues: abortion is either always OK or not; there's nothing ever "grey" about any of it. Of course, "politically" there are concerns that if you give in one area, you'll wind up giving away everything. But, isn't it just true that very late abortions, if they were to affect a fetus that can feel pain, would raise some serious moral concerns? Causing pain is bad for anyone (or anything) who can feel pain, so that would make later abortions potentially troubling (which isn't to say that or when they would be wrong or not; if pain is caused, that pain could be justified by other concerns: acknowledging a serious concern doesn't mean it trumps everything). But pro-choice extremists often dismiss fetal pain as not even potentially morally relevant, just as extremists against abortion dismiss everything said in defense of even very early abortions. Both forms of unwillingness to "compromise" or concede that the "other side" has a potentially good case are problematic: both are dogmatic and unresponsive to the facts and moral arguments.
3.
So why is extremism problematic?
Ultimately, because extremists refuse to engage in giving reasons and seeking productive discussions on important issues when the issues are complex and so there are plausible concerns on contrary sides of the issues.
Extremism in this sense is always a problem, and at least in the case of many pro-choice people, extremism is often contrary to their values—for science, for scientific thinking (and systematic thinking about ethical issues is part of that), for diversity, for respectful dialogue—which are often expressed on signs like this one below.
For these reasons, and to better seek pro-choice goals, pro-choice extremism should be recognized and reformed into positive and productive forms of engagement, communication, and education. Doing this would more effectively address anti-abortion extremism than any current responses. 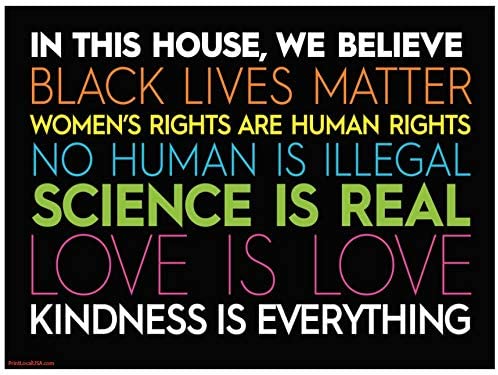 P.S. Another question is when and whether people are blameworthy for their extremism. It's possible that some people are not blameworthy for being extremists: e.g., perhaps they've had traumatic experiences with an issue that prevents them from being anything other than extremists. If so, perhaps these people should not be involved in (much, or certain types of) public engagement on the issues. Also, if some people are even blamelessly extremist doesn't mean that extremism is ever good or part of an overall effective strategy for making or keeping social change.
All blog posts are here!
By Nathan Nobis

Email ThisBlogThis!Share to TwitterShare to FacebookShare to Pinterest
Labels: extremism