College Ethics: A Reader on Moral Issues that Affect You, Second Edition 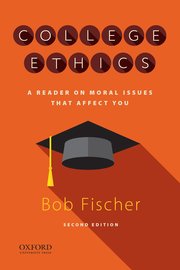 College Ethics: A Reader on Moral Issues that Affect You, Second Edition, edited by Bob Fischer, is out and contains our chapter "Defining 'Abortion' and Critiquing Common Arguments about Abortion." This chapter is very similar to what's in Thinking Critically About Abortion.
I suppose something interesting here is this: some pro-choice people seem to think that these issues shouldn't even be discussed (in classes, or anywhere else): they say things like "this issue isn't up for debate," "we shouldn't be discussing this" and the like. So I suppose these people would be offended by the Marquis readings, maybe parts of the Hursthouse, and maybe even some of what Thompson says.
Two questions: is a view like this correct? Is a view like this smart or wise? I do agree that some issues, many issues, are indeed "off the table" (or they should be!) and should not be debated since such debate mistakenly and wrongly might suggest that there is reasonable debate when there is not: there aren't "good people on both sides" of all issues. But is abortion one of those issues? Why or why not?
PART II. Abortion
* 9. Kristina Grob and Nathan Nobis, Defining "Abortion" and Critiquing Common Arguments about Abortion
* 10. Judith Jarvis Thomson, A Defense of Abortion
* 11. Don Marquis, Why Abortion Is Immoral
12. Rosalind Hursthouse, Virtue Theory and Abortion
All other blog posts are available here: here are some of them:
By Nathan Nobis

Email ThisBlogThis!Share to TwitterShare to FacebookShare to Pinterest
Labels: strategy