There's an argument against abortion that says this:

This argument has been dubbed the "impairment argument" against abortion and has gotten some development and defense in philosophical journals.

While the argument might be new and might seem clever (maybe another "zinger"?), it at least seems that the argument just isn't good, for pretty simple and obvious reasons.

Simply put, why is causing, say, fetal alcohol syndrome wrong? Why is someone knowingly and avoidably causing something like this blameworthy?

The most obvious and straightforward answer is this:

Even more simply put, why avoid fetal alcohol syndrome? So your future child doesn't have medical problems and life difficulties that they wouldn't have, if they hadn't had fetal alcohol syndrome. It would be interesting to review what's medical professionals say for why fetal alcohol syndrome is bad and should be avoided: I'd bet what they say is very similar to this common-sense explanation.
Now, does this explanation suggest anything about abortion? Does it suggest that abortion is wrong?
No, not at all. It doesn't apply, since—by design—abortion results in there not being some future person, much less a future person with a lower quality of life than they would have had.
So the basic reason to be concerned about fetal alcohol syndrome just doesn't apply to abortion. So the argument doesn't appear to work, again, for pretty simple and obvious reasons. (This discussion here, however, does again suggest that "bodily autonomy" arguments for abortion have limits, since bodily autonomy wouldn't, say, justify knowingly doing what will lead to someone having fetal alcohol syndrome).
Of course, that doesn't mean that the conclusion is false or that there aren't better arguments for the same conclusion.
But maybe the objection above is mistaken? Maybe the argument really is a good one? If so, how and why is that? 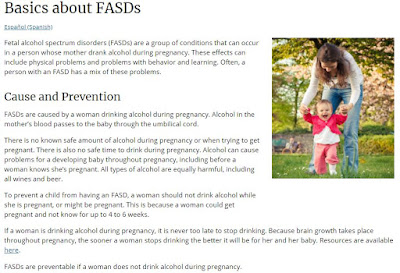 From https://www.cdc.gov/ncbddd/fasd/facts.html
This discussion in video format:
Update: similar arguments are made here:
Cushing S.
Why the wrongness of intentionally impairing children in utero does not imply the wrongness of abortion.
Journal of Medical Ethics Published Online First: 05 September 2022. doi: 10.1136/jme-2022-108583
All other blog posts are available here.
By Nathan Nobis