Section 5.1.3 of "Thinking Critically About Abortion," "Fetuses are persons"

From Thinking Critically About Abortion:

Finally, we get to what some see as the core issue here, namely whether fetuses are persons, and an argument like this:
Fetuses are persons, perhaps from conception.
Persons have the right to life and are wrong to kill.
So, abortion is wrong, as it involves killing persons.
The second premise seems very plausible, but there are some important complications about it that will be discussed later. So let’s focus on the idea of personhood and whether any fetuses are persons. What is it to be a person? One answer that everyone can agree on is that persons are beings with rights and value. That’s a fine answer, but it takes us back to the initial question: OK, who or what has the rights and value of persons? What makes someone or something a person?
Answers here are often merely asserted, but these answers need to be tested: definitions can be judged in terms of whether they fit how a word is used. We might begin by thinking about what makes us persons. Consider this:
We are persons now. Either we will always be persons or we will cease being persons. If we will cease to be persons, what can end our personhood? If we will always be persons, how could that be?
Both options yield insight into personhood. Many people think that their personhood ends at death or if they were to go into a permanent coma: their body is (biologically) alive but the person is gone: that is why other people are sad. And if we continue to exist after the death of our bodies, as some religions maintain, what continues to exist? The person, perhaps even without a body, some think! Both responses suggest that personhood is defined by a rough and vague set of psychological or mental, rational and emotional characteristics: consciousness, knowledge, memories, and ways of communicating, all psychologically unified by a unique personality.
A second activity supports this understanding:
Make a list of things that are definitely not persons. Make a list of individuals who definitely are persons. Make a list of imaginary or fictional personified beings which, if existed, would be persons: these beings that fit or display the concept of person, even if they don’t exist. What explains the patterns of the lists?
Rocks, carrots, cups and dead gnats are clearly not persons. We are persons. Science fiction gives us ideas of personified beings: to give something the traits of a person is to indicate what the traits of persons are, so personified beings give insights into what it is to be a person. Even though the non-human characters from, say, Star Wars don’t exist, they fit the concept of person: we could befriend them, work with them, and so on, and we could only do that with persons. A common idea of God is that of an immaterial person who has exceptional power, knowledge, and goodness: you couldn’t pray to a rock and hope that rock would respond: you could only pray to a person. Are conscious and feeling animals, like chimpanzees, dolphins, cats, dogs, chickens, pigs, and cows more relevantly like us, as persons, or are they more like rocks and cabbages, non-persons? Conscious and feeling animals seem to be closer to persons than not.[13] So, this classificatory and explanatory activity further supports a psychological understanding of personhood: persons are, at root, conscious, aware and feeling beings.
Concerning abortion, early fetuses would not be persons on this account: they are not yet conscious or aware since their brains and nervous systems are either non-existent or insufficiently developed. Consciousness emerges in fetuses much later in pregnancy, likely after the first trimester or a bit beyond. This is after when most abortions occur. Most abortions, then, do not involve killing a person, since the fetus has not developed the characteristics for personhood. We will briefly discuss later abortions, that potentially affect fetuses who are persons or close to it, below.
It is perhaps worthwhile to notice though that if someone believed that fetuses are persons and thought this makes abortion wrong, it’s unclear how they could coherently believe that a pregnancy resulting from rape or incest could permissibly be ended by an abortion. Some who oppose abortion argue that, since you are a person, it would be wrong to kill you now even if you were conceived because of a rape, and so it’s wrong to kill any fetus who is a person, even if they exist because of a rape: whether someone is a person or not doesn’t depend on their origins: it would make no sense to think that, for two otherwise identical fetuses, one is a person but the other isn’t, because that one was conceived by rape. Therefore, those who accept a “personhood argument” against abortion, yet think that abortions in cases of rape are acceptable, seem to have an inconsistent view.

13. For a discussion of the nature of personhood, written by thirteen philosophers, see Kristen Andrews, et al, Chimpanzee Rights: The Philosophers’ Brief  (Routledge, 2018). This book addresses the general question of what persons are and applies plausible answers to the question of whether any chimpanzees are persons, and its discussion is applicable to questions about fetal personhood. This book grew out of an amicus brief, written for judges to help them better understand the issues. For discussion of the relations between arguments about the “moral status” of non-human animals and the “moral status” of human fetuses, see Nathan Nobis’s (July 16, 2016) “Abortion and Animal Rights: Does Either Topic Lead to the Other?” at the University of Colorado’s Center for Values and Social Policy blog What’s Wrong? 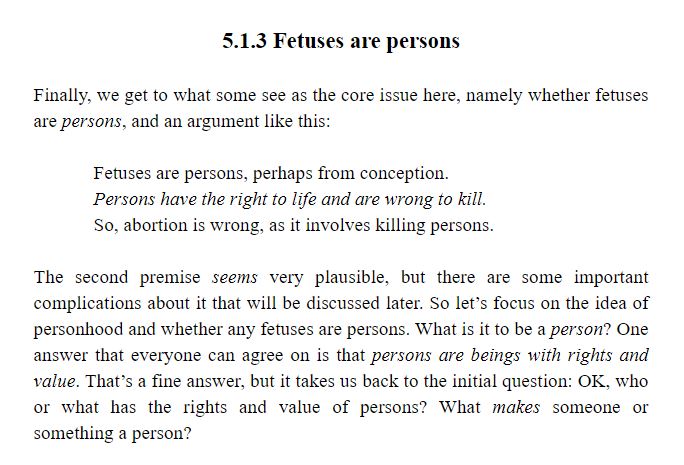 All other blog posts are available here.
By Nathan Nobis