Abortion and the Bible

Many people assume that the Bible condemns abortion. However, but there's a lot of thoughtful discussion available that argues that it does not: in fact, there are passages from the Bible that suggest that abortion is permissible, and certainly not morally equivalent to killing a born person.

Related, people often assume that Christians must, and always have, opposed abortion. Again, there is thoughtful historical and theological discussion to the contrary that people should be more aware of.

Here is the brief discussion from Thinking Critically About Abortion on these issues. (See there for working links too for support for many of the claims made.)
(Also see "What does the Bible really say about abortion?" By John J. Collins, October 16, 2020)
4.2.1.6 “The Bible says abortion is wrong.”
People often appeal to religion to justify their moral views. Some say that God thinks abortion is wrong, but it’s a fair question how they might know this, especially since others claim to know that God doesn’t think that. Some say that “only God should decide who exists and who ceases to exist, who is born and who dies,” yet this phrase lacks meaning and it fails to provide moral guidance. For example, people frequently try to reproduce, which causes people to come into existence, and this is rarely considered immoral. At the other end of the life spectrum, a "hands off" approach to end of life decisions is not just irresponsible, it is sometimes profoundly immoral.

In reply, it is sometimes said that the Bible says abortion is wrong (and that’s how we know what God thinks). But the Bible doesn’t say that abortion is wrong: it doesn’t discuss abortion at all. There is a commandment against killing, but, as our discussion above makes clear, this requires interpretation about what and who is wrong to kill: presumably, the Bible doesn’t mean that killing mold or bacteria or plants is wrong. And there are verses (Exodus 21:22-24) that, on some interpretations, suggest that fetuses lack the value of born persons, since penalties for damage to each differ. This coincides with common Jewish views on the issue, that the needs and rights of the mother outweigh any the fetus might have.

However any verses are best interpreted, they still don’t show that abortion is wrong. This is because the Bible is not always a reliable guide to morality, since there are troubling verses that seem to require killing people for trivial “crimes,” allow enslaving people (and beating them), require obeying all government officials and more. And Jesus commanded loving your neighbor as yourself, loving your enemies and taking care of orphans, immigrants and refugees, and offered many other moral guidelines that many people regard as false.[7] Simple moral arguments from the Bible assume that if the Bible says an action is wrong, then it really is wrong (and if the Bible says something’s not wrong, it’s not wrong), and both premises don’t seem to be literally true, or even believed.

This all suggests that people sometimes appeal to the Bible, and other religious sources, in selective and self-serving ways: they come to the Bible with their previously-held moral assumptions and seek to find something in the Bible to justify them. A quote from the late Christian author Rachel Held Evans gives insight and wisdom here: 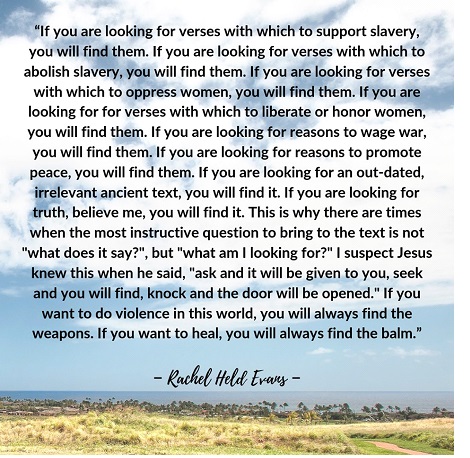 There is an interesting and important Biblical connection here worth mentioning though. Some argue that if women who want abortions are prevented from having them, that forces them to remain pregnant and give birth and this is like forcing women to be like the “Good Samaritan” from the New Testament who went out of his way, at expense to himself, to help a stranger in great need (Luke 10:25-37). (The analogy is imperfect, as analogies always are, yet imperfect analogies can yield insight.)

The problem is that in no other area of life is anyone forced to be a Good Samaritan like a pregnant woman would: e.g., you can’t be forced to donate an organ to anyone in need (even to your child or parent [8]); you can’t even be forced to donate your organs after you are dead! Nobody other than pregnant women would be forced by the government—under threat of imprisonment or worse—to use their body to help sustain someone else’s life. (Any “Good Samaritan” laws demand far, far less than what pregnancy and childbirth demand.) So it is unfair to require women to be Good Samaritans but allow the rest of us to be like the priest and Levite in the story who go out of their way to help nobody.

Finally, it’s important to remember that laws should not be based on any particular religion. If you are not, say, a Hindu, or a Buddhist, or a Rastafarian, you probably don’t want laws based solely on one of those religion’s values. Laws should be religiously-neutral; on that we all should agree.

[7] Appeals to the Bible and any other sources considered to be an authority leads to this dilemma: either there are good reasons to accept what that authority claims or not. If not, then we should not accept what the authority says. If there are good reasons, then those reasons—which we all can discuss and debate—would be why we should accept what it says, not because the “authority” says so. These insights are applied to morally problematic verses of the Bible, since we have good reasons to reject the moral guidance suggested by those verses. For discussion of these issues, which are related to the “Euthyphro dilemma” that Socrates addressed, see Spencer Case’s “Because God Says So: On Divine Command Theory,” at 1000-Word Philosophy: An Introductory Anthology
(1000WordPhilosophy.com).
All other blog posts are available here: here are some of them:
By Nathan Nobis