Here's a meme that attempts to express an argument from a forthcoming philosophy article (author and title forthcoming). I don't suppose articles are summed up as memes very often! The abstract of the paper is below. 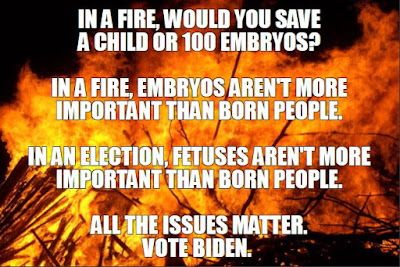 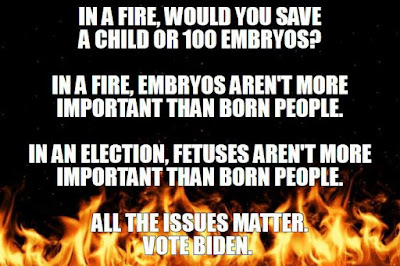 In a fire, would you save a child or 100 embryos?
In a fire, embryos aren't more important than born people.
In an election, fetuses aren't more important than born people.
All the issues matter.
Vote Biden.
Paper abstract:
The Embryo Rescue Case asks us to consider whether we should save a fully-developed child or a tray full of many embryos from a fire.
Most people pick the child. This allegedly provides evidence against the view that embryos have the same moral status as developed humans. Pro-life philosophers usually grant that you should save the child, but say that this doesn’t undermine the claim that embryos possess full moral status. There may be reasons besides differing moral status to save the child.
Meanwhile, many ordinary pro-life people think that stopping abortion is far and away the most morally urgent socio-political issue. They reason that since abortion (in their view) consists in the unjust killing of so many human persons, fighting it should be an overwhelming priority.
Here I argue that this way of reasoning about the urgency of combating abortion conflicts with the usual response to the Embryo Rescue Case. If the fact that you should save a developed human rather than many more embryos doesn’t imply that embryos lack personhood, then embryonic personhood doesn’t imply that you should save embryos rather than many fewer developed humans. 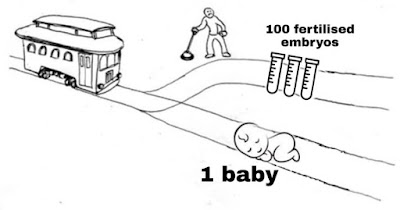 Email ThisBlogThis!Share to TwitterShare to FacebookShare to Pinterest
Labels: voting